CROSS OVER THE BRIDGE.

SERFS JEST WANT TO HAVE FUN.

In the Xmas break, drove with a coupla’ family members from Melbourne, Oz’ largest city in the south, ter our northern largest city, Sydney. Interstate rivalry, ‘Sydney versus Melbourne’ has been going on fer evah, like barracking fer football teams, but hafta’ say I luv Sydney – these photographs will show you why.

Stayed in an apartment block at McMahon’s Point looking directly across the harbour through the Sydney Harbour Bridge ter that other Sydney icon, the Sydney Oprea House. Is there another harbour anywhere, in all its changing moods, save Venice maybe, as glorious? OMG! 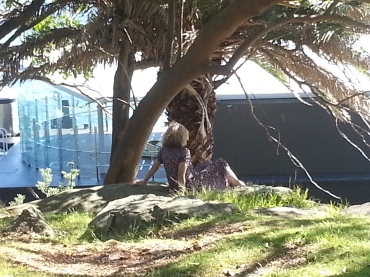 There it is. The Sydney Harbour Bridge. An Australian icon, symbol of the strength and resilience of a nation hit hard by the 1930s’ Great Depression, and symbol also of the wondrous construction capabilities of a nation’s people. When it was built, the Sydney Harbour Bridge was a feat to celebrate, the erection of the largest steel-arch bridge in the world, 612 feet longer than the bridge built in 1916 over the East River in New York.

A BRIEF HISTORY OF THE BRIDGE.

In Australia in 1788, the first English settlement, with its contingent of convicts, was established at Sydney Cove on the southern shore of Port Jackson. As new arrivals came, the settlement spread to the north shore. If settlers wanted to get from one shore to the other, they were obliged to cross the harbour by ferry or punt, or travel the long way round by road. In 1815, ex-convict and architect Francis Greenway considered the question of the building of a harbour bridge that would allow the settlement on the north shore to expand, but it was not until a century later that the proposal could be taken up.

Two people, Dr John Bradfield, and Premier Jack Lang, were largely responsible for getting it up. Dr Bradfield, of the New South Wales Public Works Department, in 1912 proposed the building of a bridge across the harbour as part of his grand vision for a suburban railway network in Sydney. Plans had to be put on hold with the outbreak of the First World War, but after the War, bills were pushed through Parliament for its construction. A report by The Bulletin, Newspaper, 23/03/1932, (P3.) acknowledges Bradfield’s efforts:

‘While the matter was before the Parliament, Bradfield almost lived on the premises. The Minister made a speech or two on the floor of the house. Bradfield made a hundred in the lobbies and the party rooms.’

The second mover and shaker, the New South Wales Premier, Jack Lang, raised the necessary finances for the building of Bridge and ensured its completion during the difficult Depression years.

The winning designer of the Sydney Harbour Bridge was Ralph Freeman, consulting engineer to the English bridge contractors Dorman, Long and Co. Some facts of its construction. The Bridge is held together by rivets only. There are no welded or bolted joints essential to the main structure. Approximately six million rivets add around 3,200 tonnes to the weight of the Bridge. An Australian firm, McPherson Pty Ltd of Melbourne, supplied all the rivets to Dorman, Long and Co. To ensure the rivets would withstand heavy loads, a system of quality control was set up in which two or three rivets from each batch were tested to the recommended levels.

The Bridge’s arch was built in two separate halves stretching out over the harbour until they were joined in the middle. In August 1930 the steel cables which were anchoring the two halves were loosened and both sides of the bridge were lowered to allow them to be set into place. The completion of this major phase was celebrated with a half day holiday and bonus of two shillings for the bridge workers. The Sydney Morning Special Bridge Number, 16/03/32 describes the response by the Director of Construction to the drama of the event:

‘Mr Lawrence Ennis, a big man who did a big job, has confessed to stress of emotion at the critical stage when the half arches were about to meet. It was night time. He was unable to speak as the parts joined and settled into place. Then after some little time he said, ”Well boys, that ‘s that, and thank God she is home.” Those present shook hands They had achieved something that many engineers in various parts of the world had said was impossible.’

Premier Jack Lang’s loan raising for public works, the ‘Lang Plan,’ which included finance of the Bridge, was highly controversial to many. His threat to suspend interest payments to English bond holders had raised the threat of socialism, even communism.

A rallying protest movement , ‘The New Guard,’ (1)  led by returned service man Eric Campbell, collected 400 000 signatures on a petition calling for Lang’s dismissal. While the movement seems to have revealed some latent fascist tendencies to restructure parliamentary democracy, the New Guard was predominantly a protest response that came to nothing after Lang was later on dismissed from office.  A comic element during the opening ceremony on the day was the cutting of the ceremonial ribbon by a member of the New Guard, Captain Francis De Groote, in a dash on horse back.  Lang had decided to by pass royalty in the Bridge ceremony and cut the ribbon himself. De Groote was seized and taken into custody and later fined five pounds. The ribbon was retied and Lang performed the honours.  The Bridge was now open!

The Bridge was paid for in full in 1988. Beauty and order out of controversy. Icons and controversy. Hmm … and then there’s that other controversy, the Sydney Opera House. But that’s another story.