FIGURES IN A LANDSCAPE.


Adrian: Though this island seems to be desert, –
It must needs be of subtle, tender and delicate temperance.

Adrian:The air breathes upon us here most sweetly.

Sebastian: As if it had lungs, and rotten ones.

Antonio: Or as ‘twere perfumed by a fen.

Gonzales: Here is everything advantageous to life.

Antonio: True; save means to live.

Sebastian: Of that there’s none, or little.


Human response to landscape – repeating some lines by Nietzche:

All nature faithfully! – But by what feint
Can Nature be subdued to art’s constraint?
Her smallest fragment is still infinite! And so he paints but what he likes in it.
What does he like? He likes what he can paint.

Guess we all, you and us serfs, impose our own preoccupations upon the landscape. No such thing as the innocent eye. 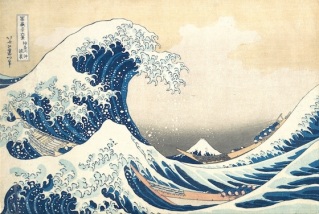 Figures in a Landscape 1.

Just look at them! Hokusai’s
small figures in a landscape,
a master’s thirty-six views of
Mt Fuji, calm, serene even,
two sweeps of the calligrapher’s
brush capturing its perfect
conic symmetry.

There they are, clambering like
beavers up its slopes, though they’re
not fooled by Nature’s randomness,
know Nature gives but also takes,
look how they wrest a living
from it, pit their energy
against it, pulling together, even
against that great wave.

Figures in a Landscape 2.

Hunters in the Snow.

In Bruegel’s masterpiece
‘Hunters in the Snow,’
though peasants skate upon
the frozen river, no
winter wonderland is this.
Silhouettes of leafless trees
stand stark against a leaden sky
that matches matt-grey river.
Exhausted dogs, hunters with meagre prey,
peasants laboring on the snow fields,
each trying to survive the Little Ice Age.

A Pastoral in Iambic Pentametre.

So delightful, the pastoral landscapes
Of Claude Lorrain, where, bathed in misty haze
In golden valleys, comely shepherds dressed
In Grecian robes, graceful shepherdesses,
With names like Philomene and Diocles,
Beneath cerulean skies and splendid trees,
Pass halcyon days in leisurely pursuits,
Pipe madrigals, sing songs, enjoy the fruits
That Nature doth provide, each in its time,
The early cherry, fig and later lime,
While sheep, lambs, bullocks, kine and fallow deer,
On sweet pastures graze conveniently near.

One wonders what they do when Winter comes?
Retreat to one of those ancient ruins
In the Claude Lorrain landscape, spend Winter
Nights discussing Plato and playing chess.
All so golden age and innocent

Seems to the aging couple, days and years
Are also changing, days seem shorter, nights darker,
Does the harvest moon wane faster than before?

Tonight there is a frost. Against the cold he selects
Another pine log from the pile, lifts it firmly
With his strong forearm, throws it on the fire.

The fire crackles and sends out sparks. In its glow
His wife looks like the girl he married long ago, hair
Glinting, shadows concealing the lines around the mouth.

Shadows, too, hide his stooped shoulders,
Bowed by years of doing battle with the elements.
In the dark forest, the bark of a lone fox.

Outside, the day grows warm. In the budding plum tree
A thrush bursts forth in song. 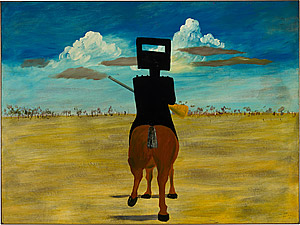 Something fascinating
about canopies.
Lying on your back in a meadow,
gazing up and up at a blue canopy
that seems to go on for ever. Or
here, beneath tall trees, canopy
of patterned leaves, hidden world
of green mysteries, squirrels’ abodes
in northern hemisphere, possums’
in southern hemisphere, gatherings
of birds in both. Or kinda’ in reverse,
you’re peering, at ground zero,
into forests of clover, watching
ants following scented trails,
mantids that lurk in thickets like
ancient dinosaurs. Then there’s
the magic of familiar things, walking
in wet weather, the pavement
shining beneath your feet, rain
drumming down on your umbrella.