DEFENCE OF A FREE SOCIETY.


Continuing the theme of opportunism as a significant factor in outbreaks of hostility between nations, Geoffrey Blainey, in ‘Causes of War’ emphasizes, for those making the decision whether to fight or not, a crucial connection between aims and means. For historians and political theorists, focusing on aims does not explain why nations fight. A serious rift between nations does not necessarily lead to war. Nations may take other options, such as breaking off diplomatic relations, setting up an economic blockade, or even reducing tension by means of a successful conference.


In Chapter 10 of his book, Professor Blainey argues that any explanations of aims in why nations wage war are inadequate if they neglect the means of carrying them out:

‘A government’s aims are strongly influenced by its assessment of whether it has sufficient strength to achieve those aims. Indeed the two factors interact quietly and swiftly. When Hitler won power in 1933 and had long term hopes of reviving German greatness, his ambitions could not alone produce a forceful foreign policy. Hitler’s foreign policy in 1933 was no more forceful than his means, in his judgement, permitted. His military and diplomatic weapons, in his opinion, did not at first permit a bold foreign policy. A.J.P. Taylor’s ‘The Origins of the Second World War,’ one of the most masterly books on a particular war, reveals Hitler as an alert opportunist who tempered his objectives to the available means of achieving them. When Hitler began to rearm Germany, he was guided not only by ambitions but by his sense of Germany’s bargaining position in Europe. He would not have rearmed if he had believed that France or Russia would forcefully prevent him from building aircraft, submarines or tanks.’ 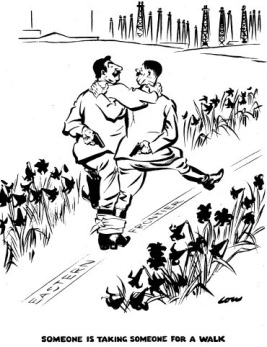 
So what’s going down in 2015 regarding international hot spots? How are the United States decision makers managing the pressures of the Middle East? Mmm, seems not so well, well, not well at all. President Obama’s historic deal with Iran this month is likely to make the Middle East more unstable, a deal that enables Iran, a country hostile to the West, to carry out its aims of developing nuclear arms capability.

Barack Obama’s deal involves a fundamental shift in the international community’s relationship with Iran. The deal lifts all U.N. Security Council sanctions as well as multilateral and national sanctions relating to Iran’s nuclear program and provisions imposed under the previous regulations.


‘The deal explicitly acknowledges that Iran is gaining benefits no other state would gain under the Non-Proliferation Treaty. Instead of dismantling Iran’s nuclear development, the program is now protected.’( www.breibart.com-national \security/2015/07/14/ ‘Everything You Need to Know about Obama’s Iran Deal.)

The International Atomic Energy Agency will monitor and verify Iran’s nuclear program, but not comprehensively. The IAEA will only have restricted access. Military sites are not included and the process for access is extraordinarily regulated.

Requests for access pursuant to provisions will be monitored by the joint commission of signatories ‘with due observation of the sovereign rights of Iran.’ The IAEA will notify Iran in writing with reasons for requesting access. Iran may propose to the IAEA an alternative.

If Iran cheats, the US and EU must take the matter to dispute resolution rather than imposing sanctions. (Cited, briebart, ibid.)

Hmm. plenty of carrots, not much stick. 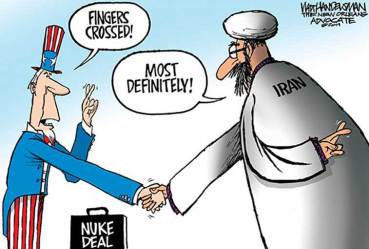 Regarding Iran’s aims, Obama et al would seem to have presented Iran with the means to facilitate them. In an article by Greg Sheridan, ‘Barack Obama’s Road to Disaster with a Rotten Iran Nuclear Deal.’ ‘The Australian’ Newspaper, 08/08/2015.) Sheridan cites ways in which the deal will make the prospect of nuclear weapons more likely through out the Middle East:

‘At the most basic level, one of the main ways the world has prevented the spread of Nuclear weapons has been to prevent the spread of the most sensitive elements of nuclear technology.

Thus most nations that have peaceful nuclear programs do not enrich their own uranium. They buy enriched uranium to use as nuclear fuel.

The Obama agreement with Iran grants complete legitimacy to Iran’s possession of every part of the nuclear cycle, including nuclear enrichment.’

‘There is not a serious strategic analyst in the world,’ says Greg Sheridan,’ who does not believe that Iran’s nuclear program is bent towards ultimate nuclear weapons capability.’


Consider, if Barack Obama were President of the US in 1941, how might things have panned out? Below, a cartoon by Dennis Skelton, ‘What If …?’ 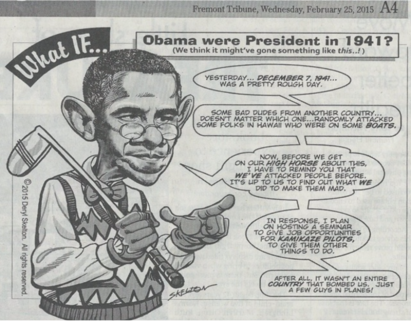 Ter be continued on a different front.:( … Or yer might prefer ter watch the cricket.


Concernin’ Australia’s Defence Policy and the saga of the submarines in Part 1.

There has been a leadership spill, Malcolm Turnbull replacing Tony Abbott as Prime Minister. There’ll be a change of Defence Minister also. Whither Defence Policy now?