THE SINGER AND THE SONG.


Part 2. Male Singers and their Songs.


For Jack A., Another songster.


I leant upon a coppice gate
When Frost was spectre-grey,
And Winter’s dregs made desolate
The weakening eye of day.
The tangled bine-stems scored the sky
Like strings of broken lyres,
And all mankind that haunted nigh
Had sought their household fires.

The land’s sharp features seemed to be
The Century’s corpse outleant,
His crypt the cloudy canopy,
The wind his death-lament.
The ancient pulse of germ and birth
Was shrunken hard and dry,
And every spirit upon earth
Seemed fervourless as I.

The bleak twigs overhead
In a full-hearted evensong *
Of joy illimited;
An aged thrush, frail, gaunt, and small,
In blast-beruffled plume,
Had chosen thus to fling his soul
Upon the growing gloom.

So little cause for carolings
Of such ecstatic sound
Was written on terrestrial things
Afar or nigh around,
That I could think there trembled through
His happy good-night air
Some blessed Hope, whereof he knew
And I was unaware.

If you’ve skipped Part 1 of ‘The Singer and the Song,’ about women singers and popular music from the 1940’s to the 1990’s, I’m arguing, contra to studies of modern music claiming a dumbing-down post the 1950’s, that there’s a lot of musical creativity out there, right up to the 1990’s, when the music industry was taken over by a few dominant commercial companies. These stranglehold production companies are ‘manufacturing’ music aimed at mass audiences via controlled outlets, resulting in a decline in popular music as noted, decrease in harmony, timbre and metric complexity, increased volume and dumbing-down of song lyrics.

But listen to many male singers and their songs, 1940’s-1980’s, there’s a rich fusion of sense and sound to be found across genres, a gamut of emotions from affirmation to angst, from complaint to contemplation. But here’s the thing, unlike the instinctive signaling of that Darkling Thrush, likely to be directly received just as instinctively by another thrush, these songs about feeling, to which we respond, are ‘about’ emotion, not emotion expressed per se. We may be ‘wired’ for music, that throbbing drumbeat, but it’s more complex than bird song signaling and response. No natural equivalence exists inherently between musical sounds and feelings, but rather, we’re disposed to metaphor, to seeking equivalences of musical experiences to feelings and values … the ‘positive’ major key, the ‘negative’ minor key, … the fast, ‘lilting’ beat, the slow, ‘sad’ beat. Music explores metaphor. And there’s a context thing of culture and genre –we’re a-tune to it.

Affirmation, but its not straight forward, despite the musical harmony and lyrical rendering by the Nelson Riddle orchestra. Affirmation, but sophisticated, there’s that introduction, …‘fighting vainly the old ennui, …’ There’s that complex metre, the opening verses’ one-two, see-saw beat, …champagne and cocaine don’t do it for him, then the transition to the smoother long vowel rhythm of the third verse…‘I-i get a kick every ti-ime I see-e you sta-anding the-ere befo-ore me-e…’ And fusion of sense and sound, that metrical stress on the words, ‘kick, ‘ and ‘I’ and ‘You.’

Footnote: Cole Porter’s song, it’s a classic, played a lot. Sophisticated Mel Brooks sends it up, has a railway work-team trial it as a work-song in ‘Blazing Saddles.’


Leonard Cohen, poet before he became a singer/song-writer, does the range, affirmation to angst. In his song, ‘Dance Me to the End of Love,’ released in 1984, there’s affirmation with undertones. It’s a Wedding Celebration song, … ‘Dance me to the wedding now, dance me on and on,’ … ‘Dance me to the children who are waiting to be born,’ … affirmation suggestd by the steady 4/4 beat and musical harmony, the chorus alto background and lyrical pathway music by a singing violin. But kinda’ bitter-sweet, those alto deep undertones, the violin singing in minor key. It is a love song but Cohen recounts part of its mysterious origins, his image of ‘burning violins’ being influenced by the World War 11 Holocaust where Jewish prisoners were pressed into playing classical music while other prisoners were being killed.


An English minstrel, Andy Partridge, singer-songwriter of the band, XTC, ‘Senses Working Overtime’ from the 1982 album ‘English Settlement.’ Listen to the medieval -sounding opening, acoustic guitar of Partridge, followed by a bass line and legato slides, hint of a tambourine, original drumming. The medieval imagery, ‘Hey-hey, the clouds are whey /there’s straw for the donkey/ and the innocents can all sleep safely, / all sleep safe-ly,’ and images celebrating the sensory world, ‘Senses working over-time/ trying to tell the difference/between lemon and lime/ pain and pleasure and/the church bells softly chime.’

From affirmation to angst, or, rather, in the next three songs, more feelings of regret for something past, than the unfocused malaise of angst. Paul McCartney, singer-songwriter and his song, ‘Yesterday,’one of my favourite songs evah. I like this version, 1965, because it’s where it began, and we hear Paul McCartney as a young minstrel. Look at the intricate patterning, sort of like 15th century poet, Thomas Wyatt’s poems about lost love, listen to its rhythmical rhyming, ‘Yesterday,’ ‘here to stay,’ ‘suddenly,’ ‘used to be,’ ‘shadow hanging over me,’ ‘she wouldn’t say,’ and continuing to the last stanza, ‘Yesterday, love was such an easy game to play,/ Now I need a place to hide away,/ Oh I believe in yesterday/’ There’s a subtle change of pattern in the third stanza, two lyric lines, then a descending scale of four minor chords, implying reflection without words.


Gordon Lightfoot singer, song writer and this, another favourite…mmm, his song written in 1970, ‘If You Could Read My Mind, Love.’ There’s a seeming simplicity, but it’s an artful simplicity, doesn’t even need the accompanying orchestral backing, lovely as it is, there’s that harmonic counter-point of voice and guitar, subtle vibration of the singer’s voice, the ‘sad’ oscillating rhythm, descending chords of ‘I don’t know where we went wrong / but the feeling’s gone/and I just can’t get it back.’ And there’s the poetry of the lyrics, not metaphor but simile, ‘Just like an old time movie/’bout a ghost in a wishing well,’…‘the hero will be me…’ I particularly like this kayak video with the song, the vulnerable craft ending up in the reeds.

How goes the world about? … A subject of Complaint.

Angst lifts up a register to complaint. No one does it better than Bob Dylan. Bob Dylan singing ‘Mr Tambourine Man,’ at Newport Festival in 1964, voice more penetrating than musical, but his vocal’ I am here,’ no less vigorous than the song of Hardy’s darkling thrush. And Dylan is more explorative in song and messaging than any song bird, his creative music history spans half a century, singer-songwriter, performer on guitar, keyboard and harmonica, his music crosses genres. In his recording career, Dylan has explored many of the traditions in American song—from reinvigorating folk music, to blues, gospel and rock and roll. Backed by a changing lineup of musicians, he has toured steadily since the late 1980s on what has been dubbed “the Never Ending Tour.’ In 2017 Dylan released an album, ‘Triplical,’ comprising 30 new recordings of classic songs such as ‘As Time Goes By.’ And still going, few musicians as prolific as Bob Dylan.


Bet yr thought I’d left out Elvis? No way! Elvis Presley, one of the legendary rock’n roll performers of the 1950’s-60’s. burst on to the rock scene like a bombshell in January, 1956, with the song, ‘Heartbreak Hotel… ‘Although it’s always crowded, (dah-dah) / You still can find some room, (dah-dah) / For broken hearted lovers / To cry there in the gloom, /’ ‘Heartbreak Hotel,’ written by high school teacher, Mae Boren Axton, sung and performed by Elvis, was top of the hit parade in the US for seven consecutive weeks.’ In 2004, it was named as one of the 500 greatest songs evah.

… So was it the gyrating performance by Elvis as he played his rhythmic guitar accompaniment that made him so famous? Partly, but also the voice, range of three octaves, rich timbre of low notes, – Elvis was a singer!


FULL volume and action in the Elvis tradition, another awesome voice and a tour de force performance, Freddie Mercury, and Queen group singing and playing Freddie’s musical composition, ‘Somebody to Love.’

In Part 1 of ‘Singer and Song’ I present research claims that over decades there’s been increasing volume and repetition in popular music. You’ll certainly find volume and repetition here, but don’t be fooled, listen to the long melody, harmony of the symphonic guitar orchestration, the intricate metre, insistent drum beat and rich vocal harmonics in the tradition of gospel singing. And Freddie’s singing! He has the range and musicality that allows just a few great artists the freedom to play dangerously with motifs and surprise and delight us.

Before I show the stage performance, listen to this, voices and lyrics in a complex interplay.

Contemplation, hmmm…guess when you’re floating a hundred thousand miles above Planet Earth you do think about things…

That communication, Ground Control to Major Tom, and then … such varied emotional charges evoked by the three scenarios. Gravitas of the first scenario, slow drum beat and then drum rattle as in a military parade, deep voice of the singer. Second scenario, triumphant highlight, mission achieved! David Bowie’s voice has been recorded so that he sings a back-up harmony with himself, a guitar riff, chords ascending, of affirmation. Then a lovely lyrical verse, listen to the poetic assonance of the second line, ‘For here / I am sitting in a tin can, / Far away, / Planet Earth is blue, /And there’s nothing I can do.’ Scenario three, insistent, urgent question, ‘Can you hear me Major Tom? / Can you …’ Ends with those shimmering space effects. David Bowie’s Space ‘Odditity,’ subtle creation, … took some concentration. Listen to it twice.


Meanwhile Earthlinks … a finale of affirmation is called for, despite all. What better than The Traveling Wilburys, ‘End of the Line,’ from their second album. The ‘Traveling Wilburys were a British-American super-group consisting of George Harrison, Bob Dylan, Jeff Lynne, Tom Petty and Roy Orbison. The band recorded two albums, the first in 1988 and the second in 1990, though Orbison died before the second was recorded. In the video you’ll see a rocking chair for missing member, Roy Orbison. You might also like to listen to that first album with the five singers all present. 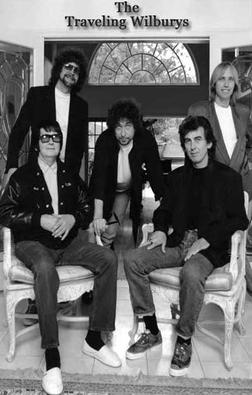